Aaron Moses Wade started out with mostly anonymous street paintings in San Francisco and Oakland, California.  He went on to do murals in New York, Los Angeles and Salvador, Brazil.   Aaron studied art and physics at UC Berkeley and eventually pioneered  the use of infra-red 35mm film in commercial cinematography.  He has subsidized his public art installations by shooting film and print campaigns in nearly 40 countries on five continents.   Aaron’s award-winning cinematography is part of the permanent collection at the New York Museum of Modern Art.

Tamara Wade’s early work as a newspaper photojournalist led her to a career in music and fashion photography where she ultimately discovered her love for fashion design.  Ever since, Tamara has dedicated herself to perfecting the crafts of pattern making and quality hand-crafted dressmaking.

Together, Tamara and Aaron have designed and built several unique architectural spaces including a fully irrigated, air scrubbing 10,000 square-foot urban biosphere where they established painting and photo studios.  They are currently  pursuing their crafts in remote solar-powered design studios overlooking the Hawaiian coastline where they are catching rain and raising their son. 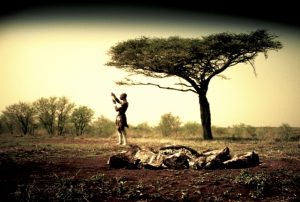